Written by Julie Lebel
Updated over a week ago

Before configuring access by zone for your event, it is important to understand the used terminology. This article defines each of the terms to avoid any confusion.

What is a manifest?

You are prompted to create a manifest when you open the Access by Zone module in the management tool. What is a manifest?

A manifest is a document that contains all access control parameters. It includes information on the different sites, zones and gates, as well as a list of the rates for which pass holders are allowed to pass through the relevant gates to access the zones. A manifest may contain one or more sites, each of which may have one or more distinct zones.

For example, a festival manifest might contain three sites that each have five zones. Therefore, the manifest would contain fifteen manageable zones in the same part of the management tool.

What is a site?

When creating a manifest, the various event sites must be entered. But what is considered a site? 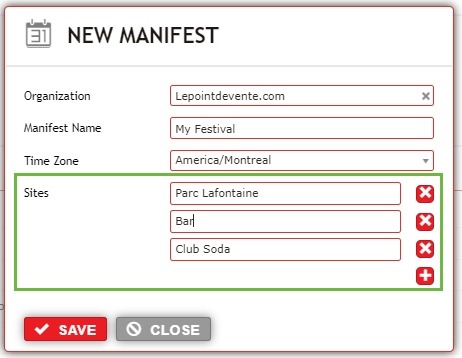 A site is a location where your event takes place. Suppose your event has multiple performances at different locations. You must create as many sites as there are locations in your manifest. These can be divided by zone.

For example, a festival might have some performances in a theatre, some in a bar and some in a park. As such, the organizer must create three sites in their manifest.

What is a zone?

We can determine different zones within a site’s parameters. But what is a zone? And what is it for? 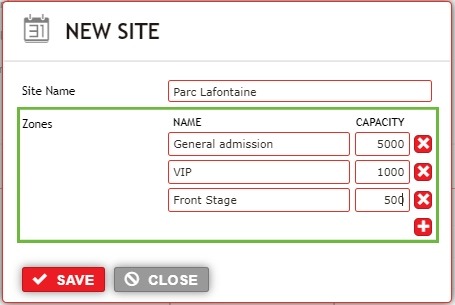 A zone is a defined space within a site. Depending on the organizer's needs, each zone can be independent or connected to the others.

A zoning system has several advantages, including:

For example, a festival might have a site with five distinct zones, some of which can only be accessed by passing through another. In this example, a VIP attendee could have a separate entrance, enter through the Gold zone, or both, depending on the site's configuration.

What is a gate?

In the context of the zone system, a gate is the zone's entry and/or exit point.

Please note: A zone can have one or more gates, and these gates can, if necessary, link zones together. In other words, instead of arriving from outside the site to enter a zone, participants may be required to enter another zone within the same site to access a specific zone. The number of gates to be added to a zone depends on the site's configuration.

For example, a zone could have one entry gate and one exit gate, or it could have a single gate for both, depending on the possibilities of the site and its human resources.

What is the origin of a gate?

You are adding a gate to your zone, and you reach the Origin field. What is its purpose? 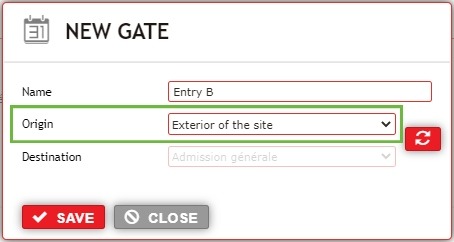 The origin is used to determine from which zone the participant is coming to enter the gate. You can decide if participants must be outside the site to enter the zone or inside another zone within site. Please note that a gate can only have one origin.

For example, the entrance to a VIP zone could be set as from outside the site in question or from the Gold zone. The organizer could also determine that a person with VIP access could enter this zone from all other adjacent zones, creating a gate for each adjacent zone.

What is the destination of a gate?

As the term implies, this is the place where the participant will enter through the created gate. 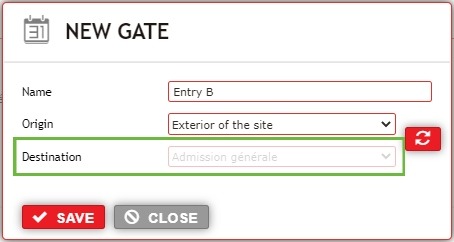 By default, changing the destination of a gate is disabled because it is created for a distinct zone. However, it is easy to change by setting another zone in origin and using the arrows to reverse the destination and origin of the selected gate quickly.

Did this answer your question?